The normal range for ICP varies with age. Values for children are not well established when compared to adults. Usually, normal limits are taken as 5 to 15 mm Hg

A surge in ICP normally occurs with activities such as suctioning, painful stimuli, and coughing and does not warrant intervention unless it does not return to baseline within 5 minutes. It is important to distinguish “normal” or expected increases/spikes in ICP while considering the treatment, therefore the word sustained rise in ICP is very important.

Intracranial pressure is the sum total of pressure exerted by the brain, blood, and cerebrospinal fluid (CSF) in the non-compliant cranial vault.

An increase in any one of these components must be offset by a decrease in another to keep the total volume constant or else the ICP will increase.

In response to increases in intracranial volume initial compensation occurs by

Compliance is an indicator of the brain’s tolerance to increases in ICP. Each patient has varying degrees of compliance even with similar injuries.

When the patient’s compliance is exhausted, there is a dramatic increase in the pressure/volume curve, leading to a rapid elevation in ICP.

In an uninjured brain, cerebral blood flow  CBF) is regulated to supply the brain with adequate oxygen and substrates.

CBF in excess of tissue demand leads to hyperemia and increased ICP. This

Cerebral perfusion pressure (CPP) is the pressure at which the brain is perfused. It is an important indicator of cerebral blood flow.

Thus CPP provides an indirect measurement of the adequacy of CBF.

It is calculated as

A reduction in CPP can occur from an increase in ICP, a decrease in blood pressure, or a combination of both factors.

< 40 mm Hg is a significant predictor of mortality in children with TBI.

Cerebral autoregulation maintains a steady cerebral blood flow (CBF) within a CPP range of 50-150 mmHg by vasoconstriction and vasodilatation of the cerebral vessels during the fluctuations in systemic blood pressure. For eg. in systemic hypertension or hypotension (states of shock)

These mechanisms of Autoregulation are lost at CPP values less than 50 mmHg. Once autoregulation is lost, CBF and cerebral blood volume (CBV) become dependent on changes in systemic blood pressure. 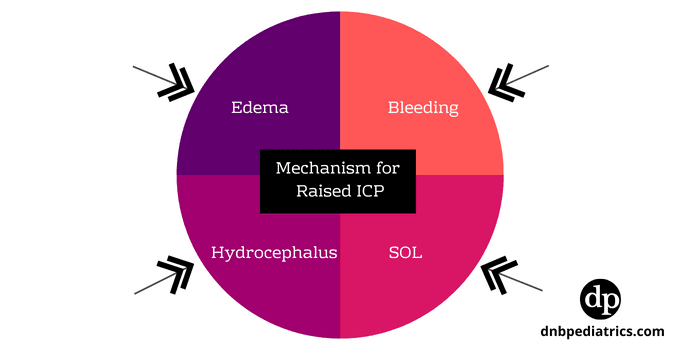 These mechanisms can operate singly or in combinations. 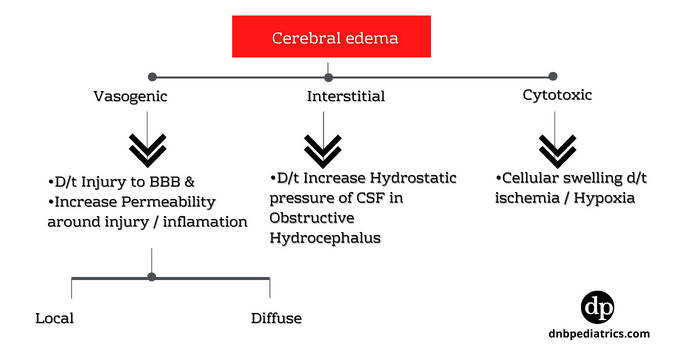 Vasogenic cerebral edema is due to injury to the blood-brain barrier and increased capillary permeability around the area of injury or inflammation, particularly in CNS infections. It can be local or diffuse and occurs around mass lesions and inflammatory processes e.g., meningitis, encephalitis).

Patients with cerebral edema may have a combination of all 3 mechanisms of raised ICP operating. When the primary cause of increased ICP is intracranial, normalization of ICP depends on rapidly addressing the underlying brain disorder. Intracranial hypertension due to an extracranial or systemic process is often remediable.

A secondary increase in the ICP is often observed 3 to 10 days after the trauma mainly as a result of a delayed formation of epidural or acute subdural hematoma, traumatic hemorrhagic contusions with surrounding edema, sometimes requiring evacuation.  cerebral vasospasm, hypoventilation,  hyponatremia

The duration of monitoring is until ICP has been normal for 24 to 48 hours without a need for therapy to reduce ICP. 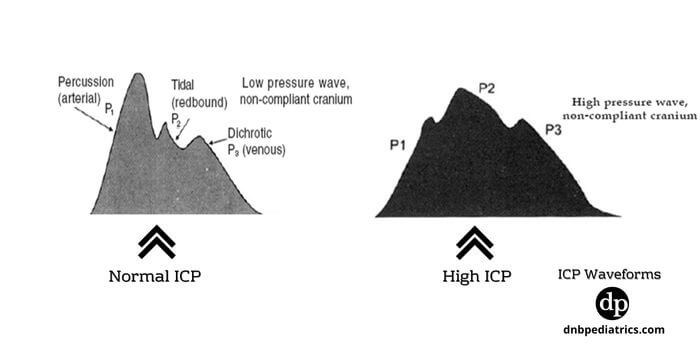 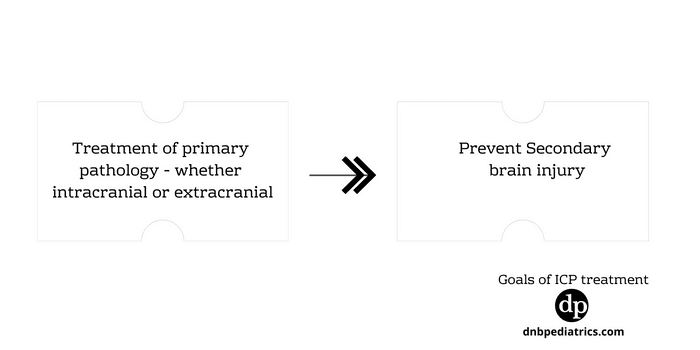 Algorithm for the treatment of raised ICP 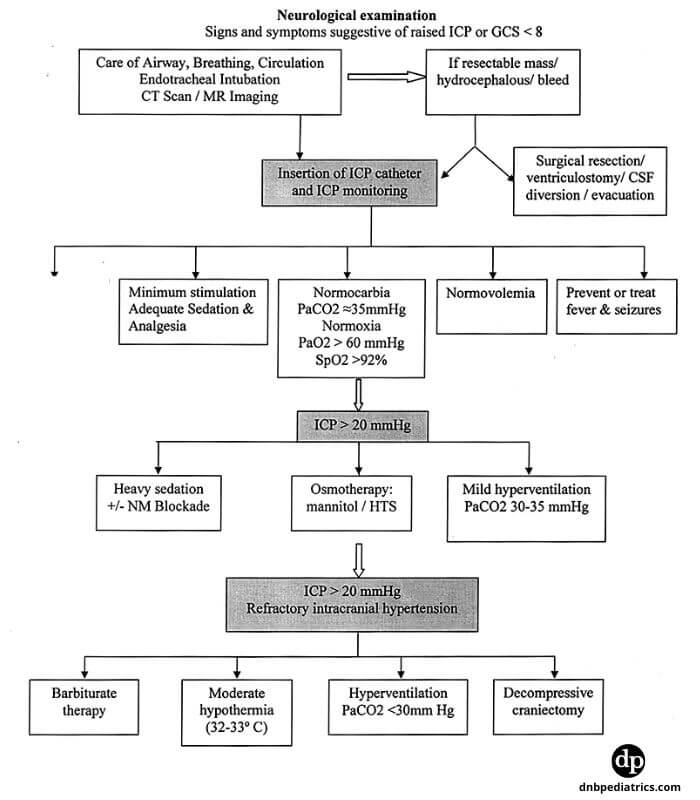 Sympathomimetic-blocking antihypertensive drugs, such as beta-blocking drugs labetalol, esmolol, or central-acting alfa-receptor agonists clonidine, are preferred because they reduce blood pressure without affecting the ICP.

Agents with a short half-life have an advantage when the blood pressure is labile. Systemic hypertension may resolve with sedation. If the decision is made to treat systemic hypertension, vasodilating drugs, such as nitroprusside, nitroglycerin, and nifedipine, should be avoided; these increase ICP, which may be deleterious to the marginally perfused injured brain.

Maintain optimal hemoglobin concentration around. A restrictive transfusion threshold is recommended since volume expansion may further ad to raised ICP.