What is a postural reflex? - Definition

They are characterized by a certain stereotyped posture of the trunk, head, and extremities when the examiner attempts a defined and sudden change of position.

The significance of individual reflexes is explained below

What are the various postural reflexes?

Examples of postural reflexes are

Normally appears from birth to 3-4 months

The reflex disappears when they learn to crawl, a movement that demands independent limb movement from the position of the head, at around 1 year of age.

Turning head to either side in a child who is lying down on their back.

Best of video's on related topics with the best ingredients

When the head is turned to one side, the arm on that side flexes while the opposite arm extends. The contralateral knee is often flexed.

Can appear as early as 18 weeks of gestation and can help facilitate vaginal delivery.

Normally disappears by the age of 5 to 6 months when they are learning complex motor skills.

Holding the child in ventral suspension and suddenly lowering towards the couch.

Arms extend as if to protect from falling, like fanning out of a parachute

Can be elicited by holding a child is in ventral suspension/prone in air with neck/head down. 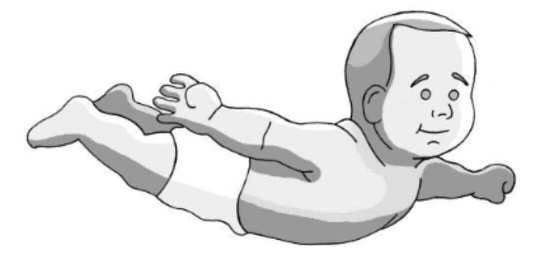 Upon holding in ventral suspension, head, spine, and legs extend like a superman. When the neck/head is flexed, the elbow, hip, and knees also flex.

Appears by the age of 3 months

Righting reflex helps to restore the normal position of the head in space and to maintain the normal postural relationship between head, trunk, and limbs during all activities.

Righting reflexes are mediated by

Reflex involves various corrective actions happening in sequence to correct the orientation of the body.

This is present at birth and is strongest at the age of 3 months. Turning head to one side is followed by movement of the rest of the body to the same side.

This appears at 7 to 12 months. When the body is turned to one side, the neck turns to the same side. It plays an important role in the child’s early attempts to sit and stand.

This is really simple to understand

When the neck flexes, arms and legs flex. Appear in utero, disappears at 4 months.

When the neck extends backward, arms and legs extend. It appears in utero and disappears by 3 months but may last up to 3 years as well.

Frequently asked question is a series of solved Pediatrics theory questions. They are not alternatives to thorough textbook reading but can be used for rapid revision at the last moment and also for clinical viva.