Pathophysiology of functional constipation in children

This guide will cover

What is functional constipation?

Constipation is broadly defined as the painful or incomplete evacuation of hard stools often characterized by infrequent stools.

Constipation is functional if there is no underlying organic cause.

Infants and toddlers up to 4 years old

The pathophysiology of functional capacity in children remains unclear but is multifactorial. 3 Most commonly discussed theories are

The most common mechanism for developing FC, especially in younger age group, is withholding behavior.

The physiology of functional constipation can be explained based on three events.

Withholding of feces leads to prolonged fecal stasis in the rectum, with the resultant absorption of fluids and harder stools.

Successive retention of stools in the rectum makes them larger.

As the cycle is repeated, successively greater amounts of larger and harder stools are built up in the rectum and passed with even greater pain accompanied by severe “stool withholding maneuvers”.

Thus a vicious cycle sets in These children develop a “stool-withholding maneuver” or retentive posture which parents mistakenly think it as an attempt to defecate.

They refuse to sit on the toilet, rather rise on their toes, hold their legs and buttocks stiffly, and often rock back and forth, holding on to furniture, screaming, and turning red until a bowel movement finally takes place.

Eventually, liquid stool from the proximal colon may percolate around these hard stools and pass per rectum involuntarily ( fecal incontinence).

With more and more stasis, the rectum becomes dilated and redundant, and the sensitivity of the defecation reflex and the effectiveness of peristaltic contractions of rectal muscles decrease. 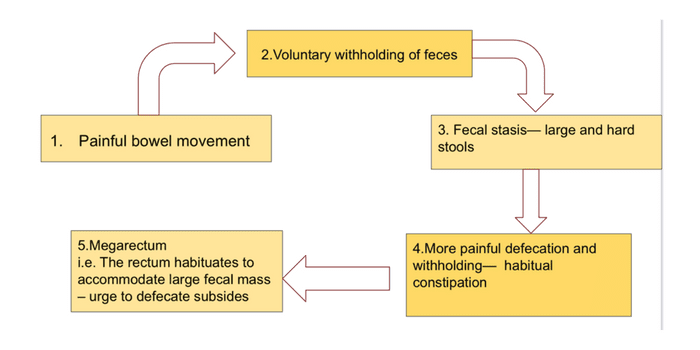 Other proposed theories for functional constipation

The interstitial cells of Cajal play an important role in gut motility. These cells act like pacemakers that generate gut peristalsis.

In some children, Functional constipation can result from low number of interstitial cells of Cajal without any other signficant pathological.organic findings.

Gayathri is DNB in Pediatrics. She has completed her residency from Meenakshi mission hospital and research centre, Madurai