Acute rheumatic fever | What are the new Jones criteria?

This guide covers the 2015 revision of Jones's criteria for diagnosis of Acute Rheumatic Fever. It also covers clinical features and diagnostic approaches to patients with echocardiographic carditis (also called as subclinical), arthritis, Sydenham chorea, and Erythema margiantum with respect to acute rheumatic fever.

It is the first important revision to the Jones Criteria by the American Heart Association since 1992.

Based on epidemiological data, the new Jones criteria for the diagnosis of acute rheumatic fever divides the cases into two main groups - Low risk and high-risk population.

Why do new jones criteria 2015 consider high-risk and low-risk categories?

In the current era, the incidence and prevalence of ARF and RHD have reduced substantially in developed nations. In developing countries though, the incidence continues to remain high with uneven global distribution of ARF/RHD.

What are the low and high risk categories?

Children not clearly from a low-risk population

By setting variations of criteria in both categories, the new Jones criteria ensure high sensitivity among those at greatest risk and high specificity for those at lower risk.

Although patients with a history of ARF are at high risk for recurrences, specific diagnostic criteria were missing in1992 revision.

What are the Major criteria?

For all patient populations with evidence of preceding GAS infection

Individual criteria are explained in the approach to diagnosis section

What is subclinical carditis?

Subclinical carditis is a situation where classic auscultatory findings of valvar dysfunction either are not present or are not recognized by the diagnosing clinician but Doppler studies reveal mitral or aortic valvulitis.

What are the Minor criteria?

For all patient populations with evidence of preceding GAS infection

How to prove evidence of Preceding Streptococcal Infection?

Note that the diagnosis of acute rheumatic fever is doubtful when evidence of preceding Group A streptococcal infection is not available.

Exceptions to this rule are

What are the Difficulties in the Interpretation of streptococcal serology?

Note that Interpretation of streptococcal serology results can be difficult in populations with endemic skin or upper respiratory group A streptococcal infections.

In these settings, a negative streptococcal antibody test helps to exclude a recent infection, but a positive test does not necessarily indicate an infection in the past few months.

A. Carditis in acute rheumatic fever

Previous AHA Jones criteria (1992) mention carditis as a clinical diagnosis based on the auscultation of typical murmurs that indicate MR or AR, at either or both valves.

Note that Valvulitis is by far the most consistent feature of ARF, and isolated pericarditis or myocarditis is rarely rheumatic in origin.

With declining auscultatory skills and widespread use of ECHO, the concept of subclinical carditis is introduced as a valid rheumatic fever major manifestation.

Flowchart for approaching case of carditis in acute rheumatic fever 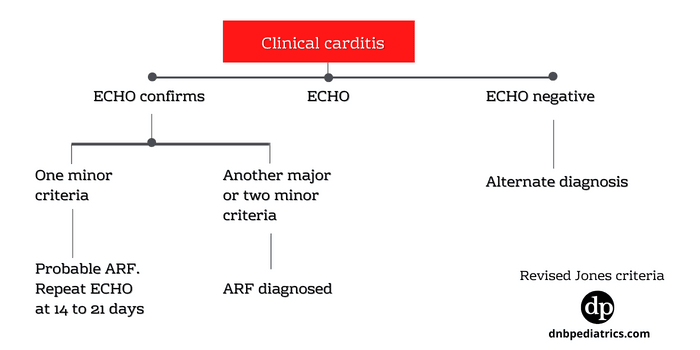 Subclinical carditis - Refer above for the definition and criteria

Recommendations for ECHO in AHA 2015 revision

B. Arthritis in acute rheumatic fever

Flowchart for approaching case of arthritis in acute rheumatic fever 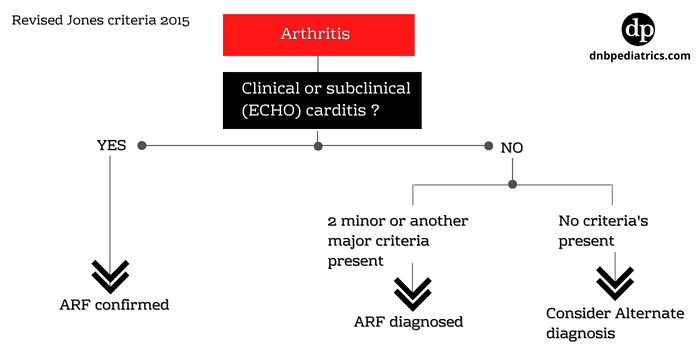 Studies have indicated that aseptic monoarthritis may be an important clinical manifestation. This led to the inclusion of monoarthritis as a major criterion in high-risk populations.

Polyarthralgia is a very common but nonspecific manifestation of many rheumatic disorders.

But children with polyarthralgia are more likely to have ARF if they come from a high-incidence population. Therefore, it is included as a minor criterion for low-risk and a major for the high-risk group in newly revised jones criteria.

Chorea associated with acute rheumatic fever is characterized by purposeless, involuntary and non-stereotypical movements of the trunk or extremities. It is commonly associated with muscle weakness and emotional lability.

What is a stereotypical movement?

Flowchart for approaching case of Chorea in acute rheumatic fever 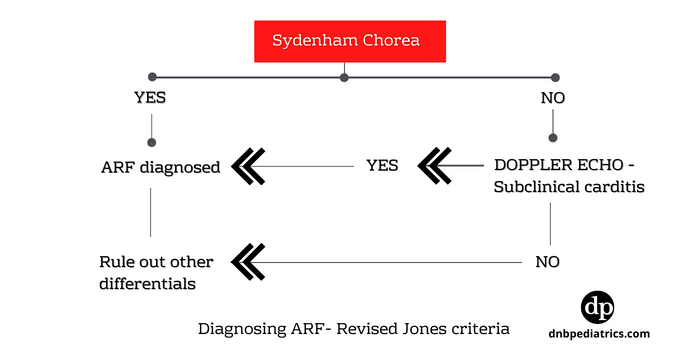 Erythema marginatum is a unique, evanescent, pink rash with pale centers and rounded margins. Classically seen on the trunk and proximal extremities and is not facial.

Heat can induce its appearance, and it blanches with pressure. It is harder to detect in dark-skinned individuals.

Firm, painless protuberances are found on extensor surfaces at specific joints, such as knees, elbows, wrists, occiput, and along the spinous processes vertebrae.

They are commonly seen in those who also have carditis. 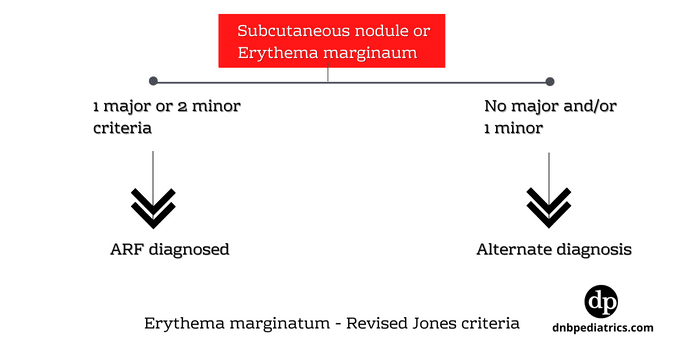 1992 AHA guidelines mention that children with a history of acute rheumatic fever or established RHD are at high risk for recurrence if reinfected with group A streptococci.

Read the criteria for diagnosing Rheumatic Fever Recurrences above.

Sometimes the required criteria may not be fulfilled for the diagnosis of acute rheumatic fever.

Therefore in a high incidence population, the clinician must use clinical acumen to make the likely diagnosis and start management rather than refuting the diagnosis based on the fulfillment of all the criteria. This is specifically important in areas where rheumatic fever and rheumatic heart disease are highly prevalent.

Video by Michael H. Gewitz, the lead author of the statement, about brief explaination on revision.